Service Login
No products in the cart
€ 150.00 Left to free shipping!

Playing outdoors is fun! Maybe you’re planning a little garden party for playful friends and family members? In this article we’ve brought together six fun outdoor games everyone will love.

You know it’s finally spring when the winter hats and jackets go in a box in the loft. But this year, the season is threatened by hungry elk who plan to eat every single spring flower they can find. Everyone knows how much elk love picture perfect spring flowers. Can you stop them?

One child is the elk, one adult is the florist and everyone else is a beautiful spring flower.

The florist whispers the name of a type of flower to each child in turn without the elk hearing: cowslip, thimbleweed, or snowdrop, for example. The flowers then line up in a large circle around the florist and the game starts. When the florist shouts “thimbleweed” for example, all thimbleweeds run towards the florist while the elk tries to catch one of them before they make it to the florist's shelter. If any flower gets eaten, they immediately turn into another elk and help the original elk catch more flowers.

The round is over when all the spring flowers have either been eaten or gathered around the florist in a beautiful spring bouquet.

Tip! As a florist, you can think strategically. You could shout “snowdrops”, for example, even though all the flowers are cowslips, or vice versa. Whatever you can to confuse and tire out the elk!

As an insect watcher, you can discover everything that crawls, flies and wriggles in the garden, park or forest. And if you document your finds like a real discoverer, you’ll get a fun book to keep for later. A playful project now and later!

Decorate a notebook with pencils, stickers and other lovely little bits and bobs or buy a really nice one. Welcome to your new insect book!

Pack your insect book and some snacks into your backpack, head out on an excursion and see what you find! Every time you find a new insect, draw it on a new page in the book. Invent your own name for it and think about what it likes to do.

With older children, you can end the day by looking through the book together and, with the help of a real insect book or the internet, working out the real names of the insects they’ve found.

The natural world is full of treasure! When you play out in the woods, garden or park, all finds are equally special.

Make game boards with nine squares each for all of the treasures you want treasure hunters to find in the forest or other natural area in which you’re playing. If there are lots of hunters at different ages, you can make different boards with different levels of difficulty. The treasure to be found can include:

The first person to fill all the boxes wins and is crowned Supreme Treasure Hunter. The winner gets to decide what yummy cakes everyone should eat at the picnic later. 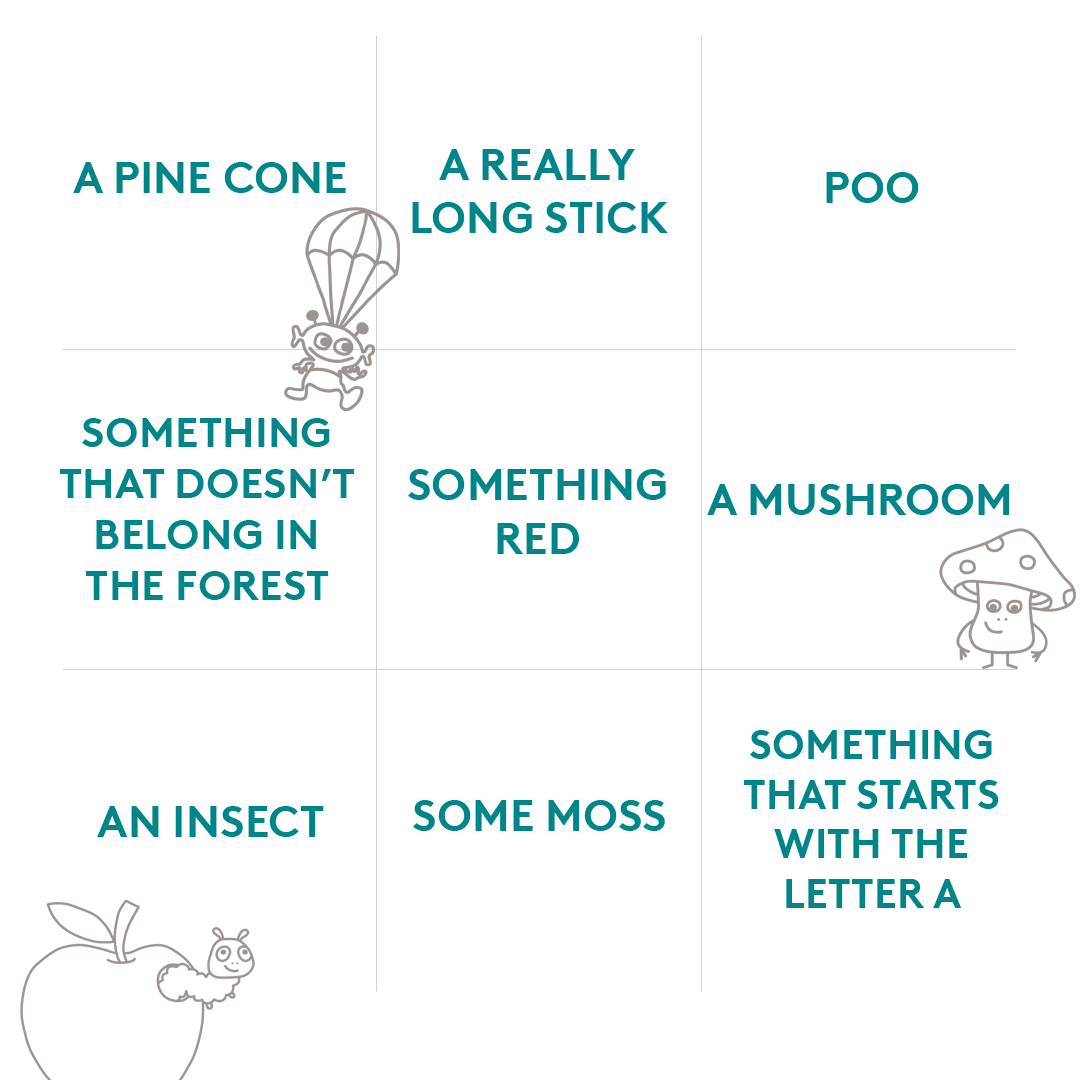 It's time for athletes big and small to warm up because it’s time for Don’t Touch the Floor. Jump on the spot, have a good stretch and take a couple of high jumps. You’re ready for the challenge!

Everyone knows that Pippi Longstocking is the Don’t Touch the Floor champion! Pippi usually plays indoors, but you can set up a tricky course out in the garden, woods or playground.

Ready, set, go! Go down the slide, balance across the planks, climb a rock, tiptoe round the sandpit and finish with a thrilling final sprint on a hobbyhorse. How many times can you make it round without touching the ground?

To play bocce outdoors, you need:

Divide into teams. One team gets the green blocks and the other gets the yellow blocks (or whatever colours you’ve chosen). Divide the blocks evenly between everyone who’s going to play.

Lay out the string or stick as a marker. No one’s allowed to stand in front of this point. A random person throws the tennis ball.

Vary the number of blocks and colours according to how many of you are playing. If you don’t have any blocks, take cones, sticks or anything else you find.

Remember to bring the blocks back in when you’ve finished playing. Blocks love the feeling of being out in the breeze but get sad about being forgotten.

Moo! The cows are feeling lonely and want some more friends. Plus, they’re freezing and need somewhere to live.

Start by looking for good building materials, and then just see how it goes!

Put four small sticks in an apple and you have a pig. Do the same with a pinecone and it could be a horse. You might need a hammer and some nails to hold some things together.

Some sticks on the ground can become a farmhouse or pasture for the animals. And of course, the animals will need some food too. They usually love leaves and grass!

Our newsletter is full of inspiration and the latest research! By submitting your email address below, you agree to Micki's Privacy Policy.